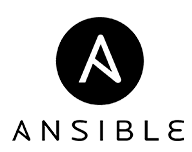 The simplest way to automate enterprise IT everything

Ansible is a Complete IT Automation Platform 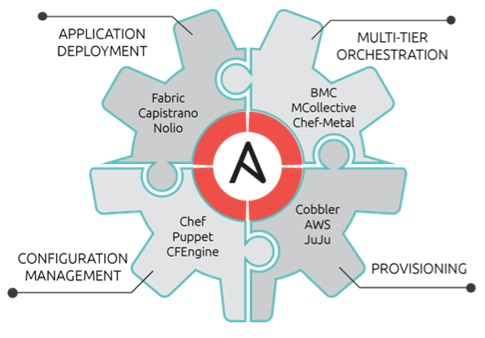 Ansible is a simple, agentless, and powerful IT automation platform. Its simplicity, coupled with its capabilities enable customers to create and automate even the most complicated of tasks with elegant simplicity. And because Ansible doesn’t require an agent to deliver its value, it can do all of this while leveraging existing (and already approved) SSH and WinRM ports.

Centralizes and manages configuration files on servers, network devices, and other systems.

It’s likely you currently manage your systems with a collection of scripts and ad-hoc practices curated by a talented team of administrators. Or perhaps you’re using an automation framework that requires a bit too much of your time to maintain. Virtualization and cloud technology have increased the complexity and the number of systems to manage is only growing.

You need a consistent, reliable, and secure way to manage the environment – but many solutions have gone way too far in the other direction, actually adding complexity to an already complicated problem. You need a system that builds on existing concepts you already understand and doesn’t require a large team of developers to maintain. 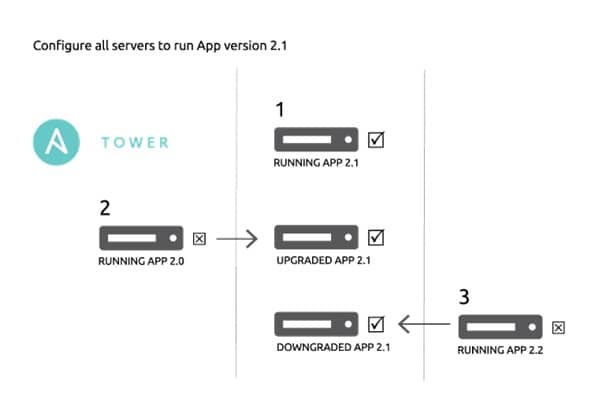 Create and build physical and virtual servers on a variety of infrastructure platforms.

Applying configurations to servers and devices is only interesting if those endpoints already exist. Rather than rely on a bunch of cobbled-together custom scripting, or worse– manual instance creation– why not automate the server creation process itself? You want to deploy the same servers with the same configurations each and every time, and it needs to be easy, fast, and repeatable.

You need an automation platform that comes with batteries included, allowing you to define and deploy applications to any number of physical, virtual, or cloud-based environments without having to reinvent the wheel each time.

Automate the deployment and management of application stacks.

Rather than writing custom code to automate your systems, your team writes simple task descriptions that even the newest team member can understand on first read — saving not only up-front costs, but making it easier to react to change over time.

How can you deploy configurations if the servers haven’t been provisioned yet? Ansible is declarative, and playbooks are applied in the order you write them, so rest assured that your workflow will be followed to the letter, in order, each and every time you run it, enabling you to automate even the most complex of tasks with simple elegance. Imagine the possibilities: rolling app updates, entire applications deployed with a single click, simple environment maintenance. The possibilities are limited only by your imagination.

What are some of the practical things I can do with Ansible?

We come from a long history of building software the “release early, release often” way. If release often is an ideal, continuous application delivery may be nirvana.

To do it right, automation is key — but so is simplicity. Your team needs the tools that enable quick turnaround, requiring human intervention only when necessary. That’s what Ansible does with one of the easiest paths to continuous delivery in the industry.

Ansible provides true multi-tier, multi-step orchestration. Ansible’s push-based architecture allows very fine-grained control over operations, able to orchestrate configuration of servers in batches, all while working with load balancers, monitoring systems, and cloud or web services. Slicing thousands of servers into manageable groups and updating those 100 at a time is incredibly simple, and can be done in a half page of automation content.

To truly leverage the power of containers, you need an orchestration tool that can help you provision, deploy and manage your servers with Docker/LXC running on them – and help you build container images themselves, in the simplest way possible. Ansible gets you there.

DevOps without Leaving Legacy Behind

Finding ways to promote the adoption of agile methodology into legacy environments will help you drive agility into traditional IT environments. Turning your existing OS build process into a continuous integration/continuous delivery process will enable organizations to gain control of existing IT environments in ways not possible before, and offer more choices to end users without increasing complexity in management. Reuse, reuse, reuse.

Pick a cloud, any cloud! Once your applications are described using Ansible, it’s much easier to deploy them in the environment of choice, including physical bare metal, virtualized (VMWare, Red Hat, Microsoft, etc.), cloud (Amazon Web Services, Rackspace, Google Compute, Azure, etc.). Automating with Ansible helps you get there.

Why Ansible in Government?
Ansible works great in government. Here’s why.

Ansible helps IT organizations do more with less, and helps maximize investments from other technologies, reduce the manpower needed for IT tasks, and increase the reliability and repeatability of numerous IT operations. Many Ansible investments repay themselves in less than four months. In short: Ansible is extremely affordable.

No agents required. Ansible securely leverages existing ports for SSH and WinRM that are already trusted, widely used, and approved by information assurance teams. No need to install additional software on each system also reduces the security footprint, and the ability to manage network devices and other infrastructure makes it easier to spot changes. Agentless also helps environments get started with Ansible faster, as there’s no need to manually touch each and every server to bootstrap them into a management infrastructure.

Ansible playbooks are human and machine-readable plaintext files. YAML’s ease-of-use means that users don’t need to spend months learning new programming languages to be effective with Ansible. You also do not need to be an expert in Ansible to understand Ansible, so pass along a self-documenting Ansible Playbook, and development, IT ops, and infrastructure management will finally all be on the same page.

Safely delegate authority to non-privileged users, and restrict access to which playbooks can be applied to which servers and environments. With Ansible Tower, you will always have a complete audit trail of actions taken on servers and devices in your IT environment. You can even enable push-button access to deploy even the most complicated of applications.

Gone are the days where Development, IT Ops, and Infrastructure teams place blame and quarrel over responsibility. Ansible is the language of enterprise IT, and ensures that all teams are on the same page throughout the software and infrastructure lifecycle. Finally, accountability and reduced risk of miscommunication is built-in to the tool.

DevOps Without Leaving Legacy Behind

Gone are the days where Development, IT Ops, and Infrastructure teams place blame and quarrel over responsibility. Ansible is the language of enterprise IT, and ensures that all teams are on the same page throughout the software and infrastructure lifecycle. Finally, accountability and reduced risk of miscommunication is built-in to the tool.

5 Reasons to use Ansible in Government 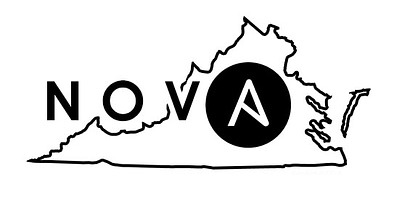 Need more information or want to talk to a representative?

LEARN MORE ABOUT
FIERCE SOFTWARE
AND WHAT WE DO